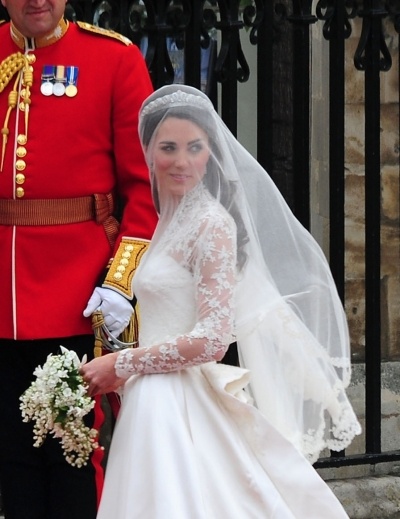 The dress had been highly anticipated by the public and had also miraculously been kept secret until the wedding day (News of the World reported that to keep it secret, the embroiderers at The Royal School of Needlework were initially told that the dress was intended for a costume drama).

It was this dress that made Sarah Burton, creative director of Alexander McQueen a household name. The dress itself is a perfect combination of traditional and contemporary design and Kate was said to have worked closely with Burke to achieve this look.

That is what makes Kate’s dress so iconic. Not just the combination of tradition and modern, but the references to other great regal wedding dresses before it. From Grace Kelly to Queen Elizabeth, this dress gives a nod to these other great dresses while having a place as it’s own iconic statement. Kate’s dress was the perfect combination of regal tradition and modern modesty. It didn’t boast itself as being a Buckingham Place statement but it didn’t sell itself short of as an every day gown either.

Another element that makes this dress so iconic in our minds is the fact that kate decided to keep in line with her own tastes (the V-neck and closely silhouetted torso are her style trademarks). This conscious decision showed us her personality as a member of the royal family as well as ensuring she would be comfortable with her wedding dress on the day. This dress is very much her creation as it is Burton’s which shows her impeccable taste and attention to detail.