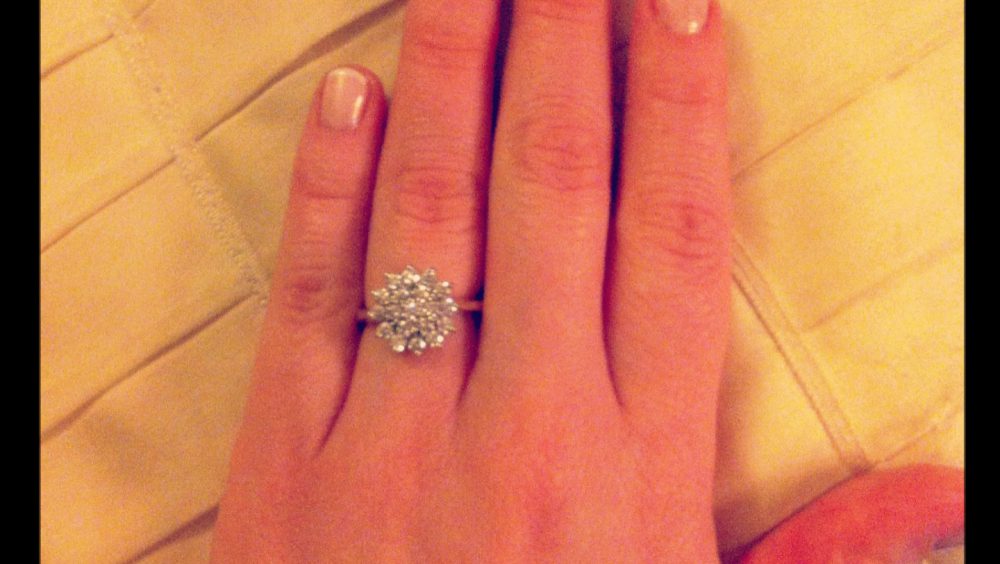 Our day for ring shopping was planned to military precision, we were going to check out our local jewellers in Navan with no expectation of really seeing anything and then head in to Dublin and hit the usual suspects; Applebys, Paul Sheeran, Weirs, PowersCourt. The day didn’t quite go as planned.

My fiancés mum’s friend has a jewellers in Navan and my future mum in law said we should go in and just take a look. We said we would go as it was important for us to give a friend of the family a chance and we were also conscious of shopping local. To be honest I had no expectation that I would find anything.

We arrived in to Vera in Town Jewellers in Navan, now it’s not a fancy Appleby’s but when you walk in, you can’t beat it when you are greeted by name by someone who knows you. We were brought to the back of the store and Vera brought out the popular cuts but I just wasn’t feeling the love. She then dipped in to the safe and brought out the crown jewels!

The rings were absolutely amazing! She had a select range of antique styles that you would not find in any other jewellers. I tried on a few rings, all of which were beautiful but then Vera produced a ring that was way out of our budget but I tried it on for the ‘craic’….as you do. I fell in love, my poor fiancés face, he knew he was in trouble. I was in heaven but knew we couldn’t afford it. I gave it back to Vera and continued to try on more. I couldn’t get that ring off my mind. I just knew it was the one. Vera suggested that I try it on again; she said it was the nicest one on my finger….at that point she very kindly said she would let us have it for our budget. I couldn’t believe it.

We had to go and get a coffee and discuss as I couldn’t believe that we were about to consider buying this ring when I hadn’t looked anywhere else. I had to have it and I just knew I wouldn’t see anything like it at the price being offered so we agreed that this was the one and we had to get it.

We went back in to Vera who made sure I was sure. I was sure! They had in resized within the hour and it was resized to perfection.

I have no regrets that I didn’t shop around more, when something feels right, its right!

Later that evening we nipped in to Dublin as we were going to The Lion King (which was amazing!) and we stopped to look in the windows of each of the jewellers that I planned on visiting and whilst they had such a beautiful range, none were as special to me as this one.

The lesson I learnt here was don’t judge a book by its cover! Just because the shop front is a little old and the interior isn’t slick and modern, doesn’t mean that the quality is any less. There is also so much to be said for dealing with someone that knows you. You won’t be let down and they will make sure that you get the right ring for you.

For the next few weeks both I and my fiancé have to complete college so we are going to be pausing further planning until we get to June. I’ll be sure to report back at the next stages!

Sara Farrell has worked in the wedding industry for almost 10 years. She started her wedding career as a wedding coordinator in the Station House Hotel in Meath and Waterside House Hotel in Dublin. She moved in to marketing soon after and works with Moran & Bewley’s Hotel Group. Sara has recently become a wedding blogger. She specialises in Digital Marketing with an ultimate passion in all things weddings!