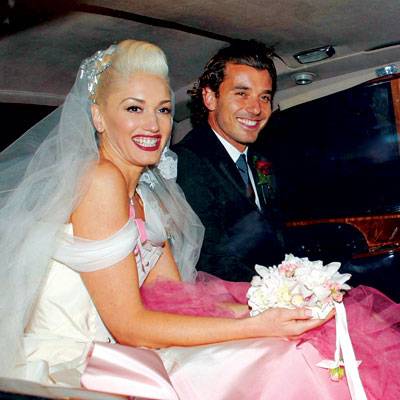 Gorgeous Gwen and Gavin dated for 6 years before finally popping the question on New Year’s Day 2002. On 14th September 2002, the two tied the knot in Covent Garden. Technically this is more than ten years ago, but it’s such a lovely story that we had to include it. Who can forget Gwen’s fairy princess dip dyed dress ( a whole decade before the trend) designed by Christian Dior complete with a veil designed by John Galliano.

In 2005, Renee shocked the world when she married country singer Kenny Chesney. Although the marriage only lasted for 128 days and Renee did go on to admit that it was huge “personal mistake” for her, we were sold on the photo of the two on the beach.

We love couple Nicole Kidman and Keith Urban. Although the two seem like an unlikely pair, it’s easy to tell how much they are in love. The two were married 2006 in Sydney after only meeting for the first time in January 2005. Proof that when you know someone is the right one, the couple have since decided to renew their vows this year… Aw!