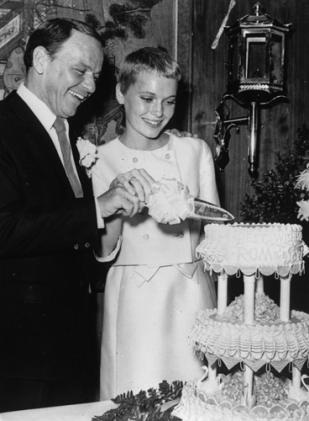 Welcome to another Throw back Thursday, where we take a look at great weddings gone passed. Celebrity throwback weddings are great because not only are they a fun flashback for everyone but they can have fantastic inspiration for your own vintage wedding.

We all look up to celebrities for inspiration and weddings are no exception! One of our favourite all time weddings is the one of Frank Sinatra and Mia Farrow who famously married in 15 minutes at The Sands Hotel in Las Vegas on June 1966. The marriage only last two years before they divorced. Sinatra went on to marry Hollywood agent Barbara Marx in 1976 and Mia went on to marry André Previn in 1970 followed by a long term relationship with Woody Allen from 1980 – 1992. Allen and Farrow split after she discovered Allen had formed a relationship with her adopted daughter, Soon-Yi.

Phew, it’s impossible to keep up with all the scandals in Hollywood! And it gets worse, apparently it was Mia’s father John, who was having an affair with Frank’s then wife Ava Gardner, who introduced Frank to her at the age of eleven.

Regardless, Mia and Frank’s wedding is one to remember. Mia looks gorgeous as a spur of the moment bride (reminds us of another recent bride). Mia had two looks for her wedding. A gorgeous two piece dress suit and lace baby doll style dress. We love this look because it’s the total opposite of the ball gown trend that was circulating at the time. Mia wore a beautiful, clean mod skirt suit that totally captures the era elegantly.

{Images from The Independent}

What’s your favourite iconic wedding look? Share them with us!