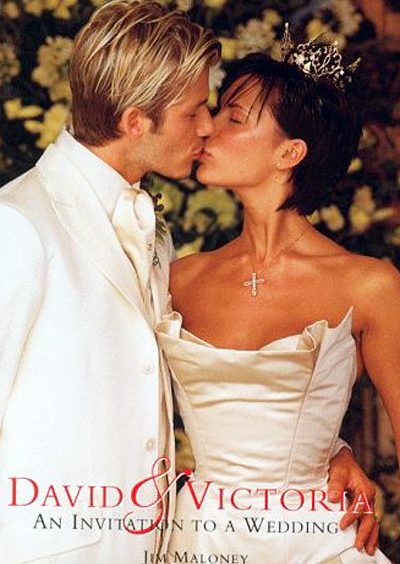 Welcome to another Throwback Thursday, where we look at some of the most iconic weddings in history. This week we’re looking at a couple who have really managed to make their celebrity marriage work over the years, Victoria and David Beckham!

It’s hard to believe the couple have been married since 1999 having only met two years beforehand. David and Victoria first met at a charity football match, prompting David to request a meeting with her. Victoria admits that she really didn’t know who he was explaining to WMagazine that she ‘was never really that into football’. David also explains in the article how he was ‘very nervous’ when he first met her because of how much he liked her.

The couple soon started dating and were engaged in 1998, when they were first dubbed ‘Posh and Becks’ by the media. Not long after, on 4th July 1999 the couple were wed by the Bishop of Cork in Luttrellstown Castle in Dublin with 29 of their nearest and dearest. A total of 437 staff were employed for the reception and was estimated to have cost over £500,000 at the time.

Strangely enough, it was the couple’s fame that brought them together. Victoria and David grew up 15 minutes from each other in London and were both from working class backgrounds. It seems like this couple were destined to be together and their wedding was nearly as exciting for the public as Will and Kate’s wedding in 2012.

Victoria wore a crown and a tight fitting ivory dress designed by Vera Wang which matched David’s ivory and cream suit. He later changed the suit to a purple one when Brooklyn threw up on him!

The couple played up to the fairytale wedding with customized thrones that they sat in during the reception with an 18 piece orchestra that played a Spice Girls medley.