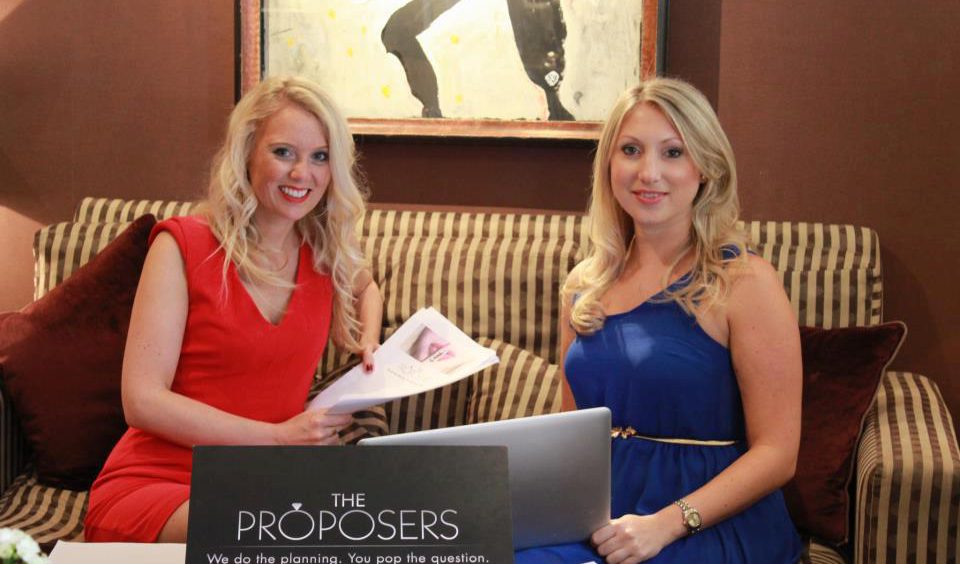 1. Who exactly are ‘The Proposers’ and what do they do?

When a guy initially gets in touch with us we he will pay 100 pounds (or the equivalant in Euro) for our; ideas package.” We will send him a questionnaire about him and his girlfriend (asking questions about her likes, dislikes, how they met etc). We basically want to find out as much as we can about the couple so that we can come up with two completely unique proposal ideas that are tailored to their relationship. We NEVER use generic ideas of Google – where’s the romance in that? All of our ideas incorporate memories/experiences from the couples relationship to make the proposal really unique to them. Once he has sent back his questionnaire we create two proposal ideas. He is then free to go away and put one of them together himself or, if he wants our help, then for an extra fee we will arrange everything – from booking venues, getting discounts, creating props to actually being there on the day to make sure everything goes smoothly! We are always in touch with the guy in question so that they are involved in the process from start to finish! Despite what people may think, the guy is 100% involved.

2. What inspired you ladies to set up a wedding proposal company?

The idea for The Proposers came around after we witnessed a creative proposal ‘gone wrong’ in Hyde Park. The thought was there but unfortunately the spelling wasn’t. The wannabe groom had decided to propose by writing Make me the happiest man alive and marry me” in candles on the grass. Unfortunately he had spelt happiest wrong. Luckily for him, Daisy and I spotted this and quickly amended it before the bride-to-be arrived – we also offered to take some photos for him whilst he was down on one knee. We stayed around to watch the magic happen and was delighted when she said YES.
Both being huge romantics and suckers for a good story, we spotted a gap in the market and decided to set-up The Proposers which offers bespoke proposal planning to anyone that just needs a bit of a helping hand.

3. Do you think men are getting more adventurous or lazy when planning their wedding proposals?

Every guy is different so we’re not going to turn around and say men are becoming lazy – I think women are just expecting more! With all these viral YouTube videos of proposals, and with celebs such as Holly Valance getting engaged by her fiance spelling out MARRY ME in flames, women are wanting proposals to be as romantic and thoughtful as possible. It doesn’t mean guys have to spend a fortune coming up with a proposal idea – it just means he should think outside the box and try and create a proposal that is thoughtful, rather than just getting a generic idea off Google. That’s why we work with men from the word go, to create  proposal that is completely tailored to his and his girlfriends relationship. We find out what things/memories/places are meaningful to them and  then try to incorporate this into a proposal.

For example, one guy told us his girlfriend loved horses. As a result he learnt to ride and then we arranged for them to go on a trek in the new forest. Unbeknown to her, we had put up gorgeous vintage signs all over the forest with memories that the two of them had shared. The last sign said “marry me.” She said afterwards that she couldn’t have asked for a better proposal as it incorporated horses (something she loves and he hates) and he had taken the time and effort to create the signs and think about what to write on them. It shows effort, and above all, a lot of love.

4. What was your favourite proposal you have worked on?

Every Proposal we do is fantastic so it’s hard to choose! We were flown out to Rome a few weeks ago and create a vintage shabby chic proposal area on top of  a rooftop terrace of the penthouse. It was stunning. We had love notes hanging from trees and fairy lights. It was stunning. We also had a proposal in the Lake District where the couple loved abseiling. We had to abseil down into a cave by one of the lakes and decorate the cave with personal memories and photos. Can you believe we had to learn to abseil just to do a proposal! It was fantastic!

5. How do you work with a groom if he wants to plan his proposal abroad?

There are two ways we can work with a Groom if he wants to propose abroad. We can ether come up with a proposal idea, buy all of the props etc and then send him a detailed plan of how he should orchestrate it on the day. However, in our experience, most grooms want the proposal to go without a hitch so they prefer to fly us out there. This means we are constantly behind the scenes making sure everything is going to plan: We’ve arranged proposals in Rome, Switzerland, Mozambique, Spain and The States so are experts. Grooms have enough to worry about on the day of the proposal so by us being there we take the stress off of him so all he has to worry about are those 4 important  words: Will You Marry Me?

6. Glam night out or cosy night in?

Glam night out followed  by a cozy night in!!

7. I love nothing more than soaking up some sun! Relaxing on an island or backpacking through Europe?

Relaxing on an Island! We arranged an amazing proposal in Mozambique where we hired out an entire sandbank and set up a Moroccan tent for the couple, complete with fresh seafood and wine. Now, that’s our perfect day without a  doubt!

8. Tell us a wedding disaster proposal story ye have heard of….

You just have to Google proposals gone wrong on YouTube and you’ll find millions. The worst we’ve actually heard of was a guy who proposed in a car park. He had arranged to propose at a party in front of all of her friends and family but he got so nervous on the way that he pulled over and did it in a car park next to some bins! That’s why men should hire proposal planners like us – we would have been there with the rescue remedy to make sure it all went to plan!!

Set up by Tiffany Wright and Daisy Amodio, The Proposers is an agency that steps in to help clueless guys plan the perfect marriage proposal. A basic package costs £100 and from a questionnaire your man fills in about you, your interests and your relationship, they dream up two celeb-style proposal scenarios. So far they have a 100% ‘yes’ rate! Although they are based in the UK, they can plan you proposal in Ireland or anywhere in the world you choose to make it happen!