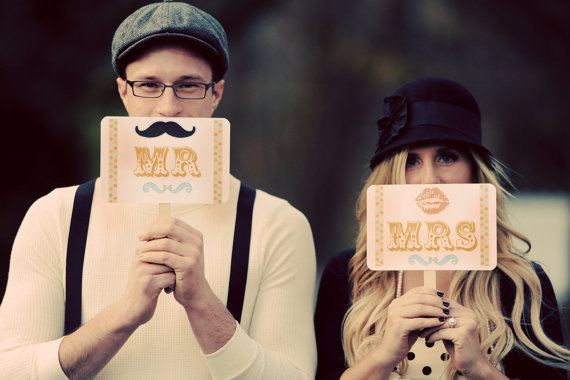 Are you going to take your husbands surname or keep you own? Perhaps you are going to keep both and have a double barrel surname. Welcome to the new wedding trend to hit Ireland and the UK, meshing. Meshing surnames consists of mixing your surname with your soon to be husband’s. So for example Miss Barry and Mr Ryan would become either Mr & Mrs Bayan or Me & Mrs Rarry.

While the trend began in America about 6 years ago, it has slowly travelled across the waters and it is said that over 800 couples in the UK have chosen to mesh their surname in this year alone! Do you know anyone who has? It seems celebrities are taking to the trend now too. Tv Dawn Porter became Mrs O’Porter recently when she married actor Chris O’Dowd. I wonder who will be the next celeb newlyweds to follow suit!

Women are no longer expected to give up their surname when they become married, while in recent years it was almost seen as a given. Double-barrelling is still a very popular choice with more couples opting for this choice rather than meshing. Husbands are also now choosing to also change to a double barrelled name. Both husband and wife have then made a change and are sporting the same surname. Now they just have to decide who’s surname comes first!

So what do our brides think? Would you be interested in meshing you and your husband’s surnames? I think it depends on what each surname is and if they sound ‘right’ together! It is a romantic thought though.