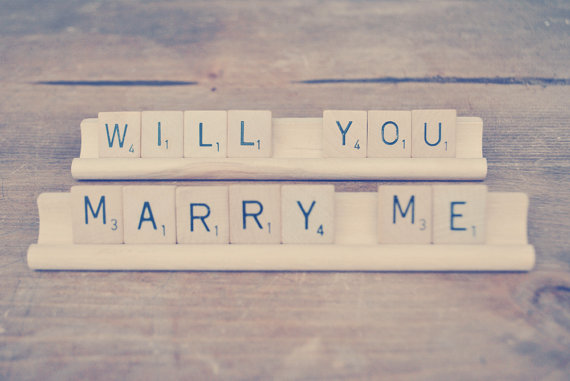 I think every woman dreams of a romantic wedding proposal. Whether it be a classic and simple gesture or one of originality and excitement, the opportunities are endless! The groom has (hopefully!) put a lot of thought and effort into his gesture. We are hoping that he has chosen something that relates to you, your personality and the relationship you both have. All these elements would make the perfect wedding proposal!

So it seems some grooms decide to go that little bit further, letting their imagination really take over! Here are our Top 10 craziest wedding proposals:

Something to remember forever or crazy beyond belief?! We shall let you decide.

One woman in the US was quietly relaxing at home. She went to her front door to find her partner standing alongside a policeman with a gun to his head after the duo had been in a high speed police chase down the street. The man asked her to reach into his pocket for his driver’s licence to give to the policeman. In her hysterical state she reach in only to find an engagement ring!

One groom hired an entire production company and shot a trailer about him and his girlfriend’s relationship. He decided to play it at a theater packed with family and friends. Apparently she thought it was an ordinary trailer and didn’t realise it was a proposal until the final 3 seconds!

While sleeping on their boat this couple were woken by helicopters circulating them. Armed police charged in and raided the house: finding some illegal substances. They announced that they would be arresting the woman. When she turned around to be handcuffed she found her boyfriend on one knee with an engagement ring.

This video – game – loving geek had his favourite video game ‘Super Mario brothers’, altered to allow for a proposal. He secretly recorded his girlfriend playing the game and when she had completed the level the words “Will you marry me?’ popped up on the screen. He was down on his knees at this stage. She accepted, they kissed and she then carried on playing the game!

This boyfriend decided to whip out a megaphone to propose to his girlfriend whom he met there the previous year. Next a cast preformed a musical for her which he featured in. Guess who is going to be centre stage at this wedding!

This groom decided to take the engagement and wedding planning into his own hands and combine it into one! His girlfriend was shocked and delighted when he proposed, only to find out he had a wedding organised for right there and then. He even had her dress bought. Luckily she said yes!

This boyfriend decided to propose underwater as the two of them were avid divers. As he could not speak down below, he had the message written on a divers chalkboard. They even ended up getting married underwater!

During a party with friends, this man asks his friend to pass him the ring while standing on the edge of the top of a building. He loses his balance and falls off! When his girlfriend runs over the the edge she looks down to find him safely rescued by a safety net with signs reading ‘Will you marry me?’.

One man got a helping hand from his stuntman best friend who he got to set him on fire. He then ran into a swimming pool, leaped out and said to his girlfriend: ‘You make me hot, will you marry me?’.

One boyfriend saved up money for over a year and created a website for people to make donations in order for him to buy ad space. He purchased local ad time during his girlfriend’s favourite TV programme ‘Veronica Mars”. While she was watching the show, up pops her boyfriend and he proposes on screen.